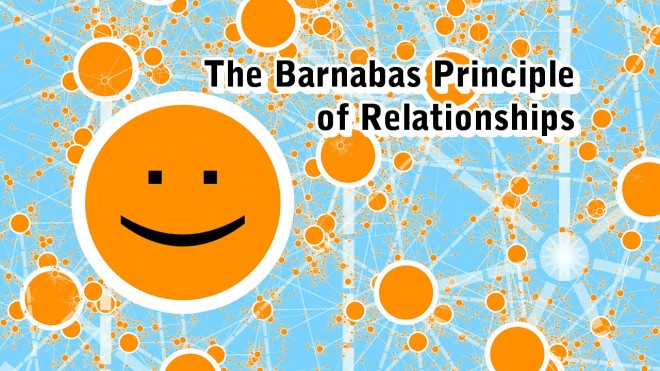 1. Be willing to invest in relationships.

All the believers were one in heart and mind. No one claimed that any of his possessions was his own, but they shared everything they had. 33 With great power the apostles continued to testify to the resurrection of the Lord Jesus, and much grace was upon them all. 34 There were no needy persons among them. For from time to time those who owned lands or houses sold them, brought the money from the sales 35 and put it at the apostles’ feet, and it was distributed to anyone as he had need. 36 Joseph, a Levite from Cyprus, whom the apostles called Barnabas (which means Son of Encouragement), 37 sold a field he owned and brought the money and put it at the apostles’ feet. Acts 4:32-37

2. Be willing to take the initiative in relationships.

After many days had gone by, the Jews conspired to kill him, 24 but Saul learned of their plan. Day and night they kept close watch on the city gates in order to kill him. 25 But his followers took him by night and lowered him in a basket through an opening in the wall. 26 When he came to Jerusalem, he tried to join the disciples, but they were all afraid of him, not believing that he really was a disciple. 27 But Barnabas took him and brought him to the apostles. He told them how Saul on his journey had seen the Lord and that the Lord had spoken to him, and how in Damascus he had preached fearlessly in the name of Jesus. 28 So Saul stayed with them and moved about freely in Jerusalem, speaking boldly in the name of the Lord. Acts 9:23-28

3. Be willing to take some risks in relationships.

Some time later Paul said to Barnabas, “Let us go back and visit the brothers in all the towns where we preached the word of the Lord and see how they are doing.” 37 Barnabas wanted to take John, also called Mark, with them, 38 but Paul did not think it wise to take him, because he had deserted them in Pamphylia and had not continued with them in the work. 39 They had such a sharp disagreement that they parted company. Barnabas took Mark and sailed for Cyprus, 40 but Paul chose Silas and left, commended by the brothers to the grace of the Lord. 41 He went through Syria and Cilicia, strengthening the churches. Acts 15:36-41

Fourteen years later I went up again to Jerusalem, this time with Barnabas. I took Titus along also.
Galations 2:1

For God, who was at work in the ministry of Peter as an apostle to the Jews, was also at work in my ministry as an apostle to the Gentiles. 9 James, Peter and John, those reputed to be pillars, gave me and Barnabas the right hand of fellowship when they recognized the grace given to me. They agreed that we should go to the Gentiles, and they to the Jews. 10 All they asked was that we should continue to remember the poor, the very thing I was eager to do. Galations 2:8-10

My fellow prisoner Aristarchus sends you his greetings, as does Mark, the cousin of Barnabas. (You have received instructions about him; if he comes to you, welcome him.)
Colossians 4:10

Epaphras, my fellow prisoner in Christ Jesus, sends you greetings. 24 And so do Mark, Aristarchus, Demas and Luke, my fellow workers. 25 The grace of the Lord Jesus Christ be with your spirit. Philemon 1:23-25