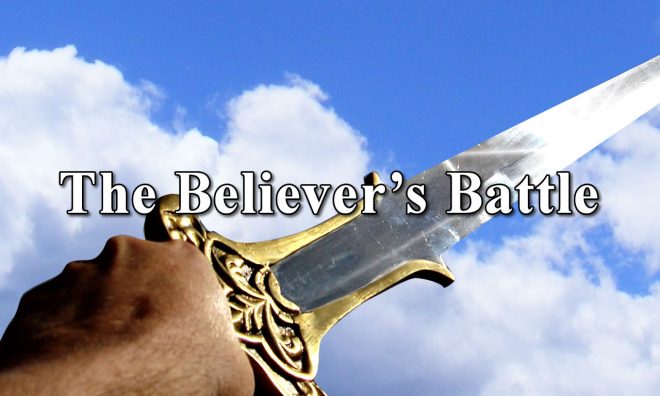 The warfare of the believer

He said: “Listen, King Jehoshaphat and all who live in Judah and Jerusalem! This is what the LORD says to you: ‘Do not be afraid or discouraged because of this vast army. For the battle is not yours, but God’s. 2 Chronicles 20:15

2. The weapons of the believer

So he said to me, “This is the word of the LORD to Zerubbabel: ‘Not by might nor by power, but by my Spirit,’ says the LORD Almighty. Zechariah 4:6

“All those gathered here will know that it is not by sword or spear that the LORD saves; for the battle is the LORD’s, and he will give all of you into our hands.” 1 Samuel 17:47

“See, it is I who created the blacksmith who fans the coals into flame and forges a weapon fit for its work. And it is I who have created the destroyer to wreak havoc; no weapon forged against you will prevail, and you will refute every tongue that accuses you. This is the heritage of the servants of the LORD, and this is their vindication from me,” declares the LORD. Isaiah 54:16-17

Take the helmet of salvation and the sword of the Spirit, which is the word of God. Ephesians 6:17

Rather, as servants of God we commend ourselves in every way: in great endurance; in troubles, hardships and distresses; in beatings, imprisonments and riots; in hard work, sleepless nights and hunger; in purity, understanding, patience and kindness; in the Holy Spirit and in sincere love; in truthful speech and in the power of God; with weapons of righteousness in the right hand and in the left; 2 Corinthians 6:4-7

The weapons we fight with are not the weapons of the world. On the contrary, they have divine power to demolish strongholds. 2 Corinthians 10:4

3. The worship of the believer

Hezekiah received the letter from the messengers and read it. Then he went up to the temple of the LORD and spread it out before the LORD. And Hezekiah prayed to the LORD: “LORD, the God of Israel, enthroned between the cherubim, you alone are God over all the kingdoms of the earth. You have made heaven and earth. Give ear, LORD, and hear; open your eyes, LORD, and see; listen to the words Sennacherib has sent to ridicule the living God.
“It is true, LORD, that the Assyrian kings have laid waste these nations and their lands. They have thrown their gods into the fire and destroyed them, for they were not gods but only wood and stone, fashioned by human hands. Now, LORD our God, deliver us from his hand, so that all the kingdoms of the earth may know that you alone, LORD, are God.” 2 Kings 19:14-19

You will not have to fight this battle. Take up your positions; stand firm and see the deliverance the LORD will give you, Judah and Jerusalem. Do not be afraid; do not be discouraged. Go out to face them tomorrow, and the LORD will be with you.’ ” Jehoshaphat bowed down with his face to the ground, and all the people of Judah and Jerusalem fell down in worship before the LORD. Then some Levites from the Kohathites and Korahites stood up and praised the LORD, the God of Israel, with a very loud voice. Early in the morning they left for the Desert of Tekoa. As they set out, Jehoshaphat stood and said, “Listen to me, Judah and people of Jerusalem! Have faith in the LORD your God and you will be upheld; have faith in his prophets and you will be successful.” After consulting the people, Jehoshaphat appointed men to sing to the LORD and to praise him for the splendor of his holiness as they went out at the head of the army, saying: “Give thanks to the LORD, for his love endures forever.” As they began to sing and praise, the LORD set ambushes against the men of Ammon and Moab and Mount Seir who were invading Judah, and they were defeated. 2 Chronicles 20:17-22