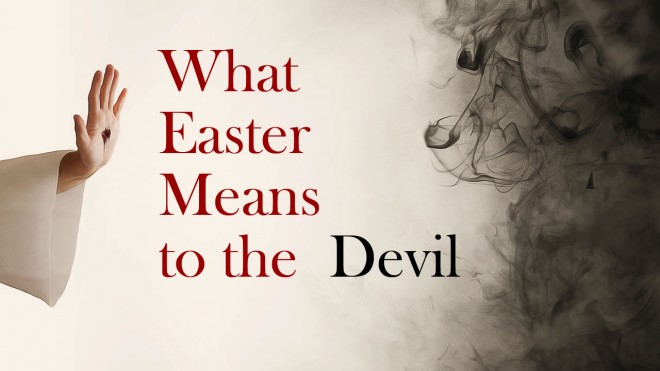 1. He is fatally wounded.

And I will put enmity between you and the woman, and between your offspring and hers; he will crush your head, and you will strike his heel. Genesis 3:15

2. His works are destroyed.

He who does what is sinful is of the devil, because the devil has been sinning from the beginning. The reason the Son of God appeared was to destroy the devil’s work. 1 John 3:8

3. He has lost the power of death.

Since the children have flesh and blood, he too shared in their humanity so that by his death he might destroy him who holds the power of death–that is, the devil– and free those who all their lives were held in slavery by their fear of death. Hebrews 2:14-15

4. He has been disarmed.

This is why it says: “When he ascended on high, he led captives in his train and gave gifts to men.” (What does “he ascended” mean except that he also descended to the lower, earthly regions ? He who descended is the very one who ascended higher than all the heavens, in order to fill the whole universe.) Ephesians 4:8-10

For Christ died for sins once for all, the righteous for the unrighteous, to bring you to God. He was put to death in the body but made alive by the Spirit, through whom also he went and preached to the spirits in prison who disobeyed long ago when God waited patiently in the days of Noah while the ark was being built. In it only a few people, eight in all, were saved through water, and this water symbolizes baptism that now saves you also–not the removal of dirt from the body but the pledge of a good conscience toward God. It saves you by the resurrection of Jesus Christ, who has gone into heaven and is at God’s right hand–with angels, authorities and powers in submission to him. 1 Peter 3:18-22

5. He has been judged and awaits his final destination.

“Now my heart is troubled, and what shall I say? ‘Father, save me from this hour’? No, it was for this very reason I came to this hour. Father, glorify your name!” Then a voice came from heaven, “I have glorified it, and will glorify it again.” The crowd that was there and heard it said it had thundered; others said an angel had spoken to him. Jesus said, “This voice was for your benefit, not mine. Now is the time for judgment on this world; now the prince of this world will be driven out. But I, when I am lifted up from the earth, will draw all men to myself.” He said this to show the kind of death he was going to die. John 12:27-33

Be self-controlled and alert. Your enemy the devil prowls around like a roaring lion looking for someone to devour. 1 Peter 5:8

For you were once darkness, but now you are light in the Lord. Live as children of light (for the fruit of the light consists in all goodness, righteousness and truth) and find out what pleases the Lord. Have nothing to do with the fruitless deeds of darkness, but rather expose them. For it is shameful even to mention what the disobedient do in secret. Ephesians 5:9-12

And the devil, who deceived them, was thrown into the lake of burning sulfur, where the beast and the false prophet had been thrown. They will be tormented day and night for ever and ever. Revelation 20:10