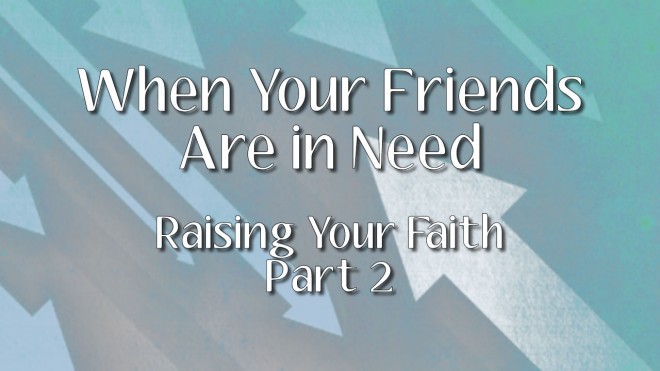 Now faith is being sure of what we hope for and certain of what we do not see. This is what the ancients were commended for. Hebrews 11:1-2

The astrologers answered the king, “There is not a man on earth who can do what the king asks! No king, however great and mighty, has ever asked such a thing of any magician or enchanter or astrologer. What the king asks is too difficult. No one can reveal it to the king except the gods, and they do not live among men.” This made the king so angry and furious that he ordered the execution of all the wise men of Babylon. Daniel 2:10-12

Then Daniel returned to his house and explained the matter to his friends Hananiah, Mishael and Azariah. He urged them to plead for mercy from the God of heaven concerning this mystery, so that he and his friends might not be executed with the rest of the wise men of Babylon. Daniel 2:17-18

Then Job replied to the LORD:”I know that you can do all things; no plan of yours can be thwarted. Job 42:1-2

When Jesus had entered Capernaum, a centurion came to him, asking for help. “Lord,” he said, “my servant lies at home paralyzed and in terrible suffering.” Jesus said to him, “I will go and heal him.” The centurion replied, “Lord, I do not deserve to have you come under my roof. But just say the word, and my servant will be healed. For I myself am a man under authority, with soldiers under me. I tell this one, ‘Go,’ and he goes; and that one, ‘Come,’ and he comes. I say to my servant, ‘Do this,’ and he does it.” When Jesus heard this, he was astonished and said to those following him, “I tell you the truth, I have not found anyone in Israel with such great faith. Matthew 8:5-10

During the night the mystery was revealed to Daniel in a vision. Then Daniel praised the God of heaven and said: “Praise be to the name of God for ever and ever; wisdom and power are his. He changes times and seasons; he sets up kings and deposes them. He gives wisdom to the wise and knowledge to the discerning. He reveals deep and hidden things; he knows what lies in darkness, and light dwells with him. I thank and praise you, O God of my fathers: You have given me wisdom and power, you have made known to me what we asked of you, you have made known to us the dream of the king.” Daniel 2:19-24

The LORD blessed the latter part of Job’s life more than the first. He had fourteen thousand sheep, six thousand camels, a thousand yoke of oxen and a thousand donkeys. And he also had seven sons and three daughters. The first daughter he named Jemimah, the second Keziah and the third Keren-Happuch. Nowhere in all the land were there found women as beautiful as Job’s daughters, and their father granted them an inheritance along with their brothers. After this, Job lived a hundred and forty years; he saw his children and their children to the fourth generation. Job 42:12-16

Then Jesus said to the centurion, “Go! It will be done just as you believed it would.” And his servant was healed at that very hour. Matthew 8:13