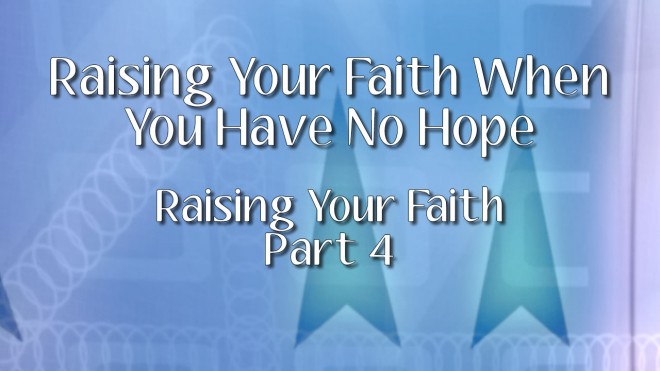 Now faith is confidence in what we hope for and assurance about what we do not see. Hebrews 11:1

And by faith even Sarah, who was past childbearing age, was enabled to bear children because she considered him faithful who had made the promise. And so from this one man, and he as good as dead, came descendants as numerous as the stars in the sky and as countless as the sand on the seashore. Hebrews 11:11-12

Then he got into the boat and his disciples followed him. Suddenly a furious storm came up on the lake, so that the waves swept over the boat. But Jesus was sleeping. The disciples went and woke him, saying, “Lord, save us! We’re going to drown!” He replied, “You of little faith, why are you so afraid?” Then he got up and rebuked the winds and the waves, and it was completely calm. The men were amazed and asked, “What kind of man is this? Even the winds and the waves obey him!” Matthew 8:23-27

While he was saying this, a synagogue leader came and knelt before him and said, “My daughter has just died. But come and put your hand on her, and she will live.” Jesus got up and went with him, and so did his disciples. Just then a woman who had been subject to bleeding for twelve years came up behind him and touched the edge of his cloak. She said to herself, “If I only touch his cloak, I will be healed.” Jesus turned and saw her. “Take heart, daughter,” he said, “your faith has healed you.” And the woman was healed at that moment. When Jesus entered the synagogue leader’s house and saw the noisy crowd and people playing pipes, he said, “Go away. The girl is not dead but asleep.” But they laughed at him. After the crowd had been put outside, he went in and took the girl by the hand, and she got up. News of this spread through all that region. Matthew 9:18-26

Now there were four men with leprosy at the entrance of the city gate. They said to each other, “Why stay here until we die? If we say, ‘We’ll go into the city’—the famine is there, and we will die. And if we stay here, we will die. So let’s go over to the camp of the Arameans and surrender. If they spare us, we live; if they kill us, then we die.” At dusk they got up and went to the camp of the Arameans. When they reached the edge of the camp, no one was there, for the Lord had caused the Arameans to hear the sound of chariots and horses and a great army, so that they said to one another, “Look, the king of Israel has hired the Hittite and Egyptian kings to attack us!” 2 Kings 7:3-6

2. Recognize and remember your hope is in the Lord

From inside the fish Jonah prayed to the LORD his God. He said: “In my distress I called to the LORD, and he answered me. From deep in the realm of the dead I called for help, and you listened to my cry. You hurled me into the depths, into the very heart of the seas, and the currents swirled about me; all your waves and breakers swept over me. I said, ‘I have been banished from your sight; yet I will look again toward your holy temple.’ The engulfing waters threatened me, the deep surrounded me; seaweed was wrapped around my head. To the roots of the mountains I sank down; the earth beneath barred me in forever. But you, LORD my God, brought my life up from the pit. “When my life was ebbing away, I remembered you, LORD, and my prayer rose to you, to your holy temple. Those who cling to worthless idols turn away from God’s love for them. But I, with shouts of grateful praise, will sacrifice to you. What I have vowed I will make good. I will say, ‘Salvation comes from the LORD.’ ” Jonah 2:1-9

Do you not know? Have you not heard? The LORD is the everlasting God, the Creator of the ends of the earth. He will not grow tired or weary, and his understanding no one can fathom. He gives strength to the weary and increases the power of the weak. Even youths grow tired and weary, and young men stumble and fall; but those who hope in the LORD will renew their strength. They will soar on wings like eagles; they will run and not grow weary, they will walk and not be faint. Isaiah 40:28-31

He said to them, “How foolish you are, and how slow to believe all that the prophets have spoken! Did not the Messiah have to suffer these things and then enter his glory?” And beginning with Moses and all the Prophets, he explained to them what was said in all the Scriptures concerning himself. Luke 24:25-27

Shortly before dawn Jesus went out to them, walking on the lake. When the disciples saw him walking on the lake, they were terrified. “It’s a ghost,” they said, and cried out in fear. But Jesus immediately said to them: “Take courage! It is I. Don’t be afraid.” “Lord, if it’s you,” Peter replied, “tell me to come to you on the water.” “Come,” he said. Then Peter got down out of the boat, walked on the water and came toward Jesus. But when he saw the wind, he was afraid and, beginning to sink, cried out, “Lord, save me!” Immediately Jesus reached out his hand and caught him. “You of little faith,” he said, “why did you doubt?” And when they climbed into the boat, the wind died down. Then those who were in the boat worshiped him, saying, “Truly you are the Son of God.” When they had crossed over, they landed at Gennesaret. And when the men of that place recognized Jesus, they sent word to all the surrounding country. People brought all their sick to him and begged him to let the sick just touch the edge of his cloak, and all who touched it were healed. Matthew 14:25-40

As Jesus approached Jericho, a blind man was sitting by the roadside begging. When he heard the crowd going by, he asked what was happening. They told him, “Jesus of Nazareth is passing by.” He called out, “Jesus, Son of David, have mercy on me!” Those who led the way rebuked him and told him to be quiet, but he shouted all the more, “Son of David, have mercy on me!” Jesus stopped and ordered the man to be brought to him. When he came near, Jesus asked him, “What do you want me to do for you?”“Lord, I want to see,” he replied. Jesus said to him, “Receive your sight; your faith has healed you.” Luke 18:35-42

The teachers of the law and the Pharisees brought in a woman caught in adultery. They made her stand before the group and said to Jesus, “Teacher, this woman was caught in the act of adultery. In the Law Moses commanded us to stone such women. Now what do you say?” They were using this question as a trap, in order to have a basis for accusing him. But Jesus bent down and started to write on the ground with his finger. When they kept on questioning him, he straightened up and said to them, “Let any one of you who is without sin be the first to throw a stone at her.” Again he stooped down and wrote on the ground. At this, those who heard began to go away one at a time, the older ones first, until only Jesus was left, with the woman still standing there. Jesus straightened up and asked her, “Woman, where are they? Has no one condemned you?” “No one, sir,” she said. “Then neither do I condemn you,” Jesus declared. “Go now and leave your life of sin.” John 8:3-11

For the grace of God has appeared that offers salvation to all people. It teaches us to say “No” to ungodliness and worldly passions, and to live self-controlled, upright and godly lives in this present age, while we wait for the blessed hope—the appearing of the glory of our great God and Savior, Jesus Christ, who gave himself for us to redeem us from all wickedness and to purify for himself a people that are his very own, eager to do what is good. These, then, are the things you should teach. Encourage and rebuke with all authority. Do not let anyone despise you. Titus 2:11-15