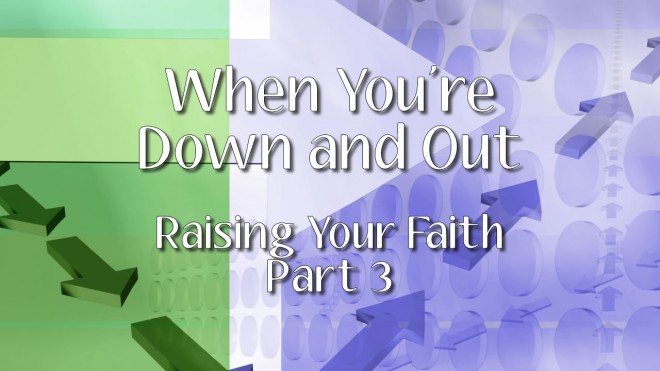 1. Face the facts of your situation

Now faith is being sure of what we hope for and certain of what we do not see. This is what the ancients were commended for. Hebrews 11:1-2

Now Ahab told Jezebel everything Elijah had done and how he had killed all the prophets with the sword. So Jezebel sent a messenger to Elijah to say, “May the gods deal with me, be it ever so severely, if by this time tomorrow I do not make your life like that of one of them.” Elijah was afraid and ran for his life. When he came to Beersheba in Judah, he left his servant there, while he himself went a day’s journey into the desert. He came to a broom tree, sat down under it and prayed that he might die. “I have had enough, LORD,” he said. “Take my life; I am no better than my ancestors.” 1 Kings 19:1-4

So we rebuilt the wall till all of it reached half its height, for the people worked with all their heart. But when Sanballat, Tobiah, the Arabs, the Ammonites and the men of Ashdod heard that the repairs to Jerusalem’s walls had gone ahead and that the gaps were being closed, they were very angry. They all plotted together to come and fight against Jerusalem and stir up trouble against it. Nehemiah 4:6-8

2. Recon with your circumstantial feelings

There he went into a cave and spent the night. And the word of the LORD came to him: “What are you doing here, Elijah?” He replied, “I have been very zealous for the LORD God Almighty. The Israelites have rejected your covenant, broken down your altars, and put your prophets to death with the sword. I am the only one left, and now they are trying to kill me too.” 1 Kings 19:9-10

Meanwhile, the people in Judah said, “The strength of the laborers is giving out, and there is so much rubble that we cannot rebuild the wall.” Also our enemies said, “Before they know it or see us, we will be right there among them and will kill them and put an end to the work.” Then the Jews who lived near them came and told us ten times over, “Wherever you turn, they will attack us.” Nehemiah 4:10-12

Afterward Jesus appeared again to his disciples, by the Sea of Tiberias. It happened this way: Simon Peter, Thomas (called Didymus), Nathanael from Cana in Galilee, the sons of Zebedee, and two other disciples were together. “I’m going out to fish,” Simon Peter told them, and they said, “We’ll go with you.” So they went out and got into the boat, but that night they caught nothing. Early in the morning, Jesus stood on the shore, but the disciples did not realize that it was Jesus. John 21:1-4

3. Focus your faith on the Lord and follow His leading

The LORD said, “Go out and stand on the mountain in the presence of the LORD, for the LORD is about to pass by.” Then a great and powerful wind tore the mountains apart and shattered the rocks before the LORD, but the LORD was not in the wind. After the wind there was an earthquake, but the LORD was not in the earthquake. After the earthquake came a fire, but the LORD was not in the fire. And after the fire came a gentle whisper. When Elijah heard it, he pulled his cloak over his face and went out and stood at the mouth of the cave. Then a voice said to him, “What are you doing here, Elijah?” He replied, “I have been very zealous for the LORD God Almighty. The Israelites have rejected your covenant, broken down your altars, and put your prophets to death with the sword. I am the only one left, and now they are trying to kill me too.” 1 Kings 19:11-14

But we prayed to our God and posted a guard day and night to meet this threat. Nehemiah 4:9

Therefore I stationed some of the people behind the lowest points of the wall at the exposed places, posting them by families, with their swords, spears and bows. After I looked things over, I stood up and said to the nobles, the officials and the rest of the people, “Don’t be afraid of them. Remember the Lord, who is great and awesome, and fight for your brothers, your sons and your daughters, your wives and your homes.” Nehemiah 4:13-14

I tell you the truth, when you were younger you dressed yourself and went where you wanted; but when you are old you will stretch out your hands, and someone else will dress you and lead you where you do not want to go.” Jesus said this to indicate the kind of death by which Peter would glorify God. Then he said to him, “Follow me!” Peter turned and saw that the disciple whom Jesus loved was following them. (This was the one who had leaned back against Jesus at the supper and had said, “Lord, who is going to betray you?”) When Peter saw him, he asked, “Lord, what about him?” Jesus answered, “If I want him to remain alive until I return, what is that to you? You must follow me.” John 21:18-22

Therefore, since we are surrounded by such a great cloud of witnesses, let us throw off everything that hinders and the sin that so easily entangles, and let us run with perseverance the race marked out for us. Let us fix our eyes on Jesus, the author and perfecter of our faith, who for the joy set before him endured the cross, scorning its shame, and sat down at the right hand of the throne of God. Consider him who endured such opposition from sinful men, so that you will not grow weary and lose heart. Hebrews 12:1-3