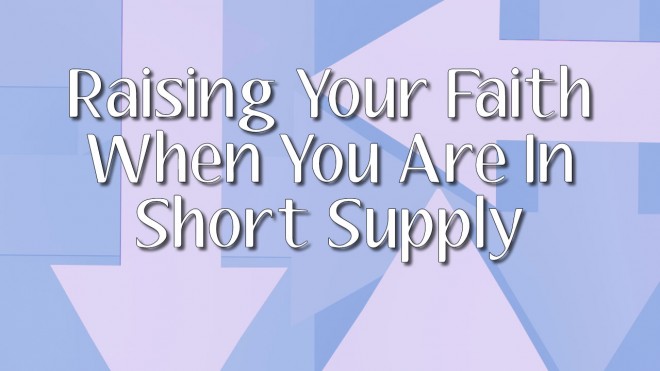 Now faith is being sure of what we hope for and certain of what we do not see. This is what the ancients were commended for. By faith we understand that the universe was formed at God’s command, so that what is seen was not made out of what was visible. By faith Abel offered God a better sacrifice than Cain did. By faith he was commended as a righteous man, when God spoke well of his offerings. And by faith he still speaks, even though he is dead. By faith Enoch was taken from this life, so that he did not experience death; he could not be found, because God had taken him away. For before he was taken, he was commended as one who pleased God. And without faith it is impossible to please God, because anyone who comes to him must believe that he exists and that he rewards those who earnestly seek him. Hebrews 11:1-6

For it is by grace you have been saved, through faith–and this not from yourselves, it is the gift of God– not by works, so that no one can boast. Ephesians 2:8-9

2. Faith and our needs

Elijah said to her, “Don’t be afraid. Go home and do as you have said. But first make a small cake of bread for me from what you have and bring it to me, and then make something for yourself and your son. For this is what the LORD, the God of Israel, says: ‘The jar of flour will not be used up and the jug of oil will not run dry until the day the LORD gives rain on the land.’ ” She went away and did as Elijah had told her. So there was food every day for Elijah and for the woman and her family. For the jar of flour was not used up and the jug of oil did not run dry, in keeping with the word of the LORD spoken by Elijah. 1 Kings 17:13-16

Jesus asked the boy’s father, “How long has he been like this?” “From childhood,” he answered. “It has often thrown him into fire or water to kill him. But if you can do anything, take pity on us and help us.” ” ‘If you can’?” said Jesus. “Everything is possible for him who believes.” Immediately the boy’s father exclaimed, “I do believe; help me overcome my unbelief!” When Jesus saw that a crowd was running to the scene, he rebuked the evil spirit. “You deaf and mute spirit,” he said, “I command you, come out of him and never enter him again.” The spirit shrieked, convulsed him violently and came out. The boy looked so much like a corpse that many said, “He’s dead.” But Jesus took him by the hand and lifted him to his feet, and he stood up. After Jesus had gone indoors, his disciples asked him privately, “Why couldn’t we drive it out?” He replied, “This kind can come out only by prayer. ” Mark 9:21-29

“This, then, is how you should pray: ” ‘Our Father in heaven, hallowed be your name, your kingdom come, your will be done on earth as it is in heaven. Give us today our daily bread. Forgive us our debts, as we also have forgiven our debtors. And lead us not into temptation, but deliver us from the evil one.’ Matthew 6:9-13

When Jesus looked up and saw a great crowd coming toward him, he said to Philip, “Where shall we buy bread for these people to eat?” He asked this only to test him, for he already had in mind what he was going to do. Philip answered him, “Eight months’ wages would not buy enough bread for each one to have a bite!” Another of his disciples, Andrew, Simon Peter’s brother, spoke up, “Here is a boy with five small barley loaves and two small fish, but how far will they go among so many?” Jesus said, “Have the people sit down.” There was plenty of grass in that place, and the men sat down, about five thousand of them. Jesus then took the loaves, gave thanks, and distributed to those who were seated as much as they wanted. He did the same with the fish. When they had all had enough to eat, he said to his disciples, “Gather the pieces that are left over. Let nothing be wasted.” So they gathered them and filled twelve baskets with the pieces of the five barley loaves left over by those who had eaten. After the people saw the miraculous sign that Jesus did, they began to say, “Surely this is the Prophet who is to come into the world.” John 6:5-14

I pray that out of his glorious riches he may strengthen you with power through his Spirit in your inner being, so that Christ may dwell in your hearts through faith. And I pray that you, being rooted and established in love, may have power, together with all the saints, to grasp how wide and long and high and deep is the love of Christ, and to know this love that surpasses knowledge–that you may be filled to the measure of all the fullness of God. Ephesians 3:16-19

And my God will meet all your needs according to his glorious riches in Christ Jesus. Philippians 4:19

I rejoice greatly in the Lord that at last you have renewed your concern for me. Indeed, you have been concerned, but you had no opportunity to show it. I am not saying this because I am in need, for I have learned to be content whatever the circumstances. I know what it is to be in need, and I know what it is to have plenty. I have learned the secret of being content in any and every situation, whether well fed or hungry, whether living in plenty or in want. I can do everything through him who gives me strength. Philippians 4:10-13

Remember this: Whoever sows sparingly will also reap sparingly, and whoever sows generously will also reap generously. Each man should give what he has decided in his heart to give, not reluctantly or under compulsion, for God loves a cheerful giver. And God is able to make all grace abound to you, so that in all things at all times, having all that you need, you will abound in every good work. As it is written: “He has scattered abroad his gifts to the poor; his righteousness endures forever.” Now he who supplies seed to the sower and bread for food will also supply and increase your store of seed and will enlarge the harvest of your righteousness. You will be made rich in every way so that you can be generous on every occasion, and through us your generosity will result in thanksgiving to God. 2 Corinthians 9:6-11