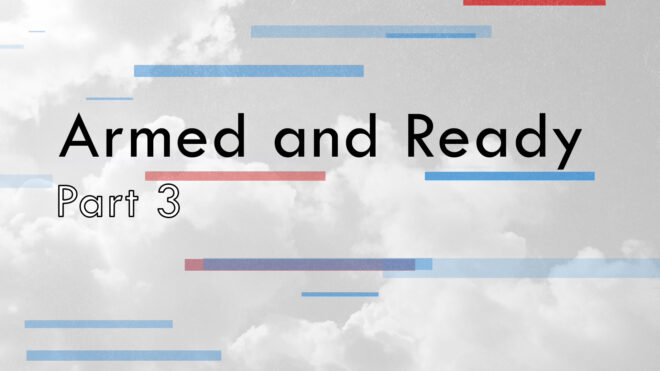 I. Take the helmet of salvation

Ephesians 6:10-17
10 Finally, my brethren, be strong in the Lord and in the power of His might. 11 Put on the whole armor of God, that you may be able to stand against the wiles of the devil. 12 For we do not wrestle against flesh and blood, but against principalities, against powers, against the rulers of the darkness of this age, against spiritual hosts of wickedness in the heavenly places. 13 Therefore take up the whole armor of God, that you may be able to withstand in the evil day, and having done all, to stand. 14 Stand therefore, having girded your waist with truth, having put on the breastplate of righteousness, 15 and having shod your feet with the preparation of the gospel of peace; 16 above all, taking the shield of faith with which you will be able to quench all the fiery darts of the wicked one. 17 And take the helmet of salvation, and the sword of the Spirit, which is the word of God;

Hebrews 10:19-25
19 Therefore, brethren, having boldness to enter the Holiest by the blood of Jesus, 20 by a new and living way which He consecrated for us, through the veil, that is, His flesh, 21 and having a High Priest over the house of God, 22 let us draw near with a true heart in full assurance of faith, having our hearts sprinkled from an evil conscience and our bodies washed with pure water. 23 Let us hold fast the confession of our hope without wavering, for He who promised is faithful. 24 And let us consider one another in order to stir up love and good works, 25 not forsaking the assembling of ourselves together, as is the manner of some, but exhorting one another, and so much the more as you see the Day approaching.

Proverbs 14:25-27
25 A true witness delivers souls, But a deceitful witness speaks lies. 26 In the fear of the Lord there is strong confidence, And His children will have a place of refuge. 27 The fear of the Lord is a fountain of life, To turn one away from the snares of death.

I Peter 1:13-21
13 Therefore gird up the loins of your mind, be sober, and rest your hope fully upon the grace that is to be brought to you at the revelation of Jesus Christ; 14 as obedient children, not conforming yourselves to the former lusts, as in your ignorance; 15 but as He who called you is holy, you also be holy in all your conduct, 16 because it is written, “Be holy, for I am holy.” 17 And if you call on the Father, who without partiality judges according to each one’s work, conduct yourselves throughout the time of your stay here in fear; 18 knowing that you were not redeemed with corruptible things, like silver or gold, from your aimless conduct received by tradition from your fathers, 19 but with the precious blood of Christ, as of a lamb without blemish and without spot. 20 He indeed was foreordained before the foundation of the world, but was manifest in these last times for you 21 who through Him believe in God, who raised Him from the dead and gave Him glory, so that your faith and hope are in God.

Colossians 3:1-11
3 If then you were raised with Christ, seek those things which are above, where Christ is, sitting at the right hand of God. 2 Set your mind on things above, not on things on the earth. 3 For you died, and your life is hidden with Christ in God. 4 When Christ who is our life appears, then you also will appear with Him in glory. 5 Therefore put to death your members which are on the earth: fornication, uncleanness, passion, evil desire, and covetousness, which is idolatry. 6 Because of these things the wrath of God is coming upon the sons of disobedience, 7 in which you yourselves once walked when you lived in them. 8 But now you yourselves are to put off all these: anger, wrath, malice, blasphemy, filthy language out of your mouth. 9 Do not lie to one another, since you have put off the old man with his deeds, 10 and have put on the new man who is renewed in knowledge according to the image of Him who created him, 11 where there is neither Greek nor Jew, circumcised nor uncircumcised, barbarian, Scythian, slave nor free, but Christ is all and in all.

II. The sword of the Spirit

I Peter 1:22-25
22 Since you have purified your souls in obeying the truth through the Spirit in sincere love of the brethren, love one another fervently with a pure heart, 23 having been born again, not of corruptible seed but incorruptible, through the word of God which lives and abides forever, 24 because “All flesh is as grass, And all the glory of man as the flower of the grass. The grass withers, And its flower falls away, 25 But the word of the Lord endures forever.” Now this is the word which by the gospel was preached to you.

II Timothy 3:1-4:5
1 But know this, that in the last days perilous times will come: 2 For men will be lovers of themselves, lovers of money, boasters, proud, blasphemers, disobedient to parents, unthankful, unholy, 3 unloving, unforgiving, slanderers, without self-control, brutal, despisers of good, 4 traitors, headstrong, haughty, lovers of pleasure rather than lovers of God, 5 having a form of godliness but denying its power. And from such people turn away! 6 For of this sort are those who creep into households and make captives of gullible women loaded down with sins, led away by various lusts, 7 always learning and never able to come to the knowledge of the truth. 8 Now as Jannes and Jambres resisted Moses, so do these also resist the truth: men of corrupt minds, disapproved concerning the faith; 9 but they will progress no further, for their folly will be manifest to all, as theirs also was. 10 But you have carefully followed my doctrine, manner of life, purpose, faith, longsuffering, love, perseverance, 11 persecutions, afflictions, which happened to me at Antioch, at Iconium, at Lystra—what persecutions I endured. And out of them all the Lord delivered me. 12 Yes, and all who desire to live godly in Christ Jesus will suffer persecution. 13 But evil men and impostors will grow worse and worse, deceiving and being deceived. 14 But you must continue in the things which you have learned and been assured of, knowing from whom you have learned them, 15 and that from childhood you have known the Holy Scriptures, which are able to make you wise for salvation through faith which is in Christ Jesus. 16 All Scripture is given by inspiration of God, and is profitable for doctrine, for reproof, for correction, for instruction in righteousness, 17 that the man of God may be complete, thoroughly equipped for every good work. 1 I charge you therefore before God and the Lord Jesus Christ, who will judge the living and the dead at His appearing and His kingdom: 2 Preach the word! Be ready in season and out of season. Convince, rebuke, exhort, with all longsuffering and teaching. 3 For the time will come when they will not endure sound doctrine, but according to their own desires, because they have itching ears, they will heap up for themselves teachers; 4 and they will turn their ears away from the truth, and be turned aside to fables. 5 But you be watchful in all things, endure afflictions, do the work of an evangelist, fulfill your ministry.

Acts 4:13-31
13 Now when they saw the boldness of Peter and John, and perceived that they were uneducated and untrained men, they marveled. And they realized that they had been with Jesus. 14 And seeing the man who had been healed standing with them, they could say nothing against it. 15 But when they had commanded them to go aside out of the council, they conferred among themselves, 16 saying, “What shall we do to these men? For, indeed, that a notable miracle has been done through them is evident to all who dwell in Jerusalem, and we cannot deny it. 17 But so that it spreads no further among the people, let us severely threaten them, that from now on they speak to no man in this name.” 18 So they called them and commanded them not to speak at all nor teach in the name of Jesus. 19 But Peter and John answered and said to them, “Whether it is right in the sight of God to listen to you more than to God, you judge. 20 For we cannot but speak the things which we have seen and heard.” 21 So when they had further threatened them, they let them go, finding no way of punishing them, because of the people, since they all glorified God for what had been done. 22 For the man was over forty years old on whom this miracle of healing had been performed. 23 And being let go, they went to their own companions and reported all that the chief priests and elders had said to them. 24 So when they heard that, they raised their voice to God with one accord and said: “Lord, You are God, who made heaven and earth and the sea, and all that is in them, 25 who by the mouth of Your servant David have said: ‘Why did the nations rage, And the people plot vain things? 26 The kings of the earth took their stand, And the rulers were gathered together Against the Lord and against His Christ.’ 27 “For truly against Your holy Servant Jesus, whom You anointed, both Herod and Pontius Pilate, with the Gentiles and the people of Israel, were gathered together 28 to do whatever Your hand and Your purpose determined before to be done. 29 Now, Lord, look on their threats, and grant to Your servants that with all boldness they may speak Your word, 30 by stretching out Your hand to heal, and that signs and wonders may be done through the name of Your holy Servant Jesus.” 31 And when they had prayed, the place where they were assembled together was shaken; and they were all filled with the Holy Spirit, and they spoke the word of God with boldness.