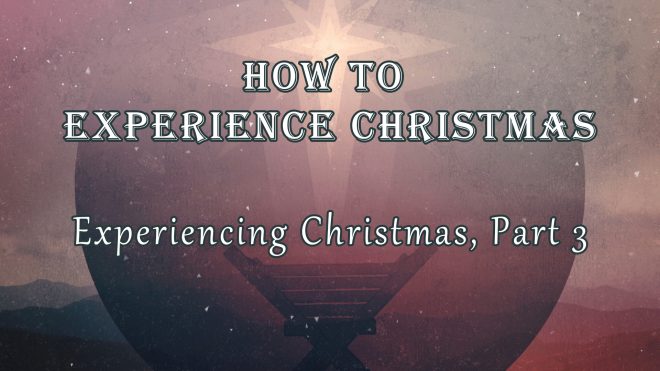 Matthew 1:18
This is how the birth of Jesus the Messiah came about: His mother Mary was pledged to be married to Joseph, but before they came together, she was found to be pregnant through the Holy Spirit.

Isaiah 55:8-14
“For my thoughts are not your thoughts, neither are your ways my ways,” declares the LORD. 9 “As the heavens are higher than the earth, so are my ways higher than your ways and my thoughts than your thoughts. 10 As the rain and the snow come down from heaven, and do not return to it without watering the earth and making it bud and flourish, so that it yields seed for the sower and bread for the eater,11 so is my word that goes out from my mouth: It will not return to me empty, but will accomplish what I desire and achieve the purpose for which I sent it. 12 You will go out in joy and be led forth in peace; the mountains and hills will burst into song before you, and all the trees of the field will clap their hands.13 Instead of the thornbush will grow the juniper, and instead of briers the myrtle will grow. This will be for the LORD’s renown, for an everlasting sign, that will endure forever.”

2 Timothy 3:16
All Scripture is God-breathed and is useful for teaching, rebuking, correcting and training in righteousness,

Romans 15:4-6
For everything that was written in the past was written to teach us, so that through the endurance taught in the Scriptures and the encouragement they provide we might have hope. 5 May the God who gives endurance and encouragement give you the same attitude of mind toward each other that Christ Jesus had, 6 so that with one mind and one voice you may glorify the God and Father of our Lord Jesus Christ.

Psalm 77:11-15
I will remember the deeds of the LORD; yes, I will remember your miracles of long ago.12 I will consider all your works and meditate on all your mighty deeds.” 13 Your ways, God, are holy. What god is as great as our God?14 You are the God who performs miracles; you display your power among the peoples.15 With your mighty arm you redeemed your people, the descendants of Jacob and Joseph.

Matthew 2:9-11
After they had heard the king, they went on their way, and the star they had seen when it rose went ahead of them until it stopped over the place where the child was. 10 When they saw the star, they were overjoyed. 11 On coming to the house, they saw the child with his mother Mary, and they bowed down and worshiped him. Then they opened their treasures and presented him with gifts of gold, frankincense and myrrh.

Luke 2:8-16
And there were shepherds living out in the fields nearby, keeping watch over their flocks at night. 9 An angel of the Lord appeared to them, and the glory of the Lord shone around them, and they were terrified. 10 But the angel said to them, “Do not be afraid. I bring you good news that will cause great joy for all the people. 11 Today in the town of David a Savior has been born to you; he is the Messiah, the Lord. 12 This will be a sign to you: You will find a baby wrapped in cloths and lying in a manger.” 13 Suddenly a great company of the heavenly host appeared with the angel, praising God and saying, 14 “Glory to God in the highest heaven, and on earth peace to those on whom his favor rests.” 15 When the angels had left them and gone into heaven, the shepherds said to one another, “Let’s go to Bethlehem and see this thing that has happened, which the Lord has told us about.” 16 So they hurried off and found Mary and Joseph, and the baby, who was lying in the manger.

Luke 2:25-32
Now there was a man in Jerusalem called Simeon, who was righteous and devout. He was waiting for the consolation of Israel, and the Holy Spirit was on him. 26 It had been revealed to him by the Holy Spirit that he would not die before he had seen the Lord’s Messiah. 27 Moved by the Spirit, he went into the temple courts. When the parents brought in the child Jesus to do for him what the custom of the Law required, 28 Simeon took him in his arms and praised God, saying: 29 “Sovereign Lord, as you have promised, you may now dismiss your servant in peace. 30 For my eyes have seen your salvation,31 which you have prepared in the sight of all nations: 32 a light for revelation to the Gentiles, and the glory of your people Israel.”

Habakuk 3:17-19
Though the fig tree does not bud and there are no grapes on the vines, though the olive crop fails and the fields produce no food, though there are no sheep in the pen and no cattle in the stalls,18 yet I will rejoice in the LORD, I will be joyful in God my Savior.

Luke 2:17-20
When they had seen him, they spread the word concerning what had been told them about this child, 18 and all who heard it were amazed at what the shepherds said to them. 19 But Mary treasured up all these things and pondered them in her heart. 20 The shepherds returned, glorifying and praising God for all the things they had heard and seen, which were just as they had been told.

Luke 2:36-38
There was also a prophet, Anna, the daughter of Penuel, of the tribe of Asher. She was very old; she had lived with her husband seven years after her marriage, 37 and then was a widow until she was eighty-four.[a] She never left the temple but worshiped night and day, fasting and praying. 38 Coming up to them at that very moment, she gave thanks to God and spoke about the child to all who were looking forward to the redemption of Jerusalem.

Psalm 111:1-4
Praise the LORD. I will extol the LORD with all my heart in the council of the upright and in the assembly. 2 Great are the works of the LORD; they are pondered by all who delight in them.3 Glorious and majestic are his deeds, and his righteousness endures forever.4 He has caused his wonders to be remembered; the LORD is gracious and compassionate.