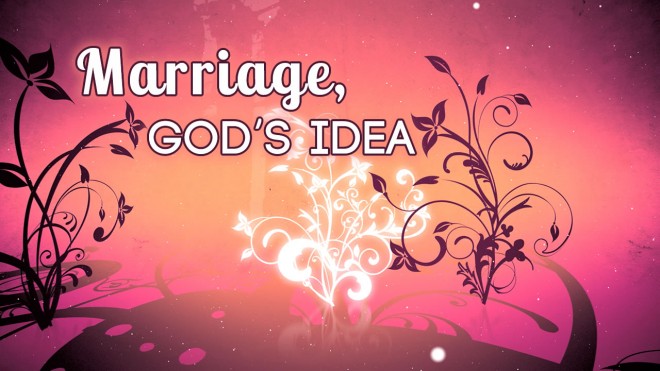 So the man gave names to all the livestock, the birds of the air and all the beasts of the field. But for Adam no suitable helper was found. So the LORD God caused the man to fall into a deep sleep; and while he was sleeping, he took one of the man’s ribs and closed up the place with flesh. Then the LORD God made a woman from the rib he had taken out of the man, and he brought her to the man. The man said, “This is now bone of my bones and flesh of my flesh; she shall be called ‘woman, ‘ for she was taken out of man.” For this reason a man will leave his father and mother and be united to his wife, and they will become one flesh. The man and his wife were both naked, and they felt no shame. Genesis 2:20-25

“But at the beginning of creation God ‘made them male and female. ‘For this reason a man will leave his father and mother and be united to his wife, and the two will become one flesh.’ So they are no longer two, but one. Therefore what God has joined together, let man not separate.” Mark 10 6-9

So God created man in his own image, in the image of God he created him; male and female he created them. Genesis 1:27

Now for the matters you wrote about: It is good for a man not to marry. But since there is so much immorality, each man should have his own wife, and each woman her own husband. 1 Corinthians 7:1-2

Wives, submit to your husbands as to the Lord. For the husband is the head of the wife as Christ is the head of the church, his body, of which he is the Savior. Now as the church submits to Christ, so also wives should submit to their husbands in everything. Husbands, love your wives, just as Christ loved the church and gave himself up for her to make her holy, cleansing her by the washing with water through the word, and to present her to himself as a radiant church, without stain or wrinkle or any other blemish, but holy and blameless. Ephesians 5:22-27

Wives, submit to your husbands, as is fitting in the Lord. Husbands, love your wives and do not be harsh with them. Colossians 3:18-19

Be kind and compassionate to one another, forgiving each other, just as in Christ God forgave you.
Ephesians 4:32

May the God who gives endurance and encouragement give you a spirit of unity among yourselves as you follow Christ Jesus, so that with one heart and mouth you may glorify the God and Father of our Lord Jesus Christ. Accept one another, then, just as Christ accepted you, in order to bring praise to God. Romans 15:5-7

Sons are a heritage from the LORD, children a reward from him. Psalm 127:3

Children, obey your parents in everything, for this pleases the Lord. Fathers, do not embitter your children, or they will become discouraged. Colossians 3:20-21

Children, obey your parents in the Lord, for this is right. “Honor your father and mother”–which is the first commandment with a promise– “that it may go well with you and that you may enjoy long life on the earth.” Fathers, do not exasperate your children; instead, bring them up in the training and instruction of the Lord. Ephesians 6:1-4

Children’s children are a crown to the aged, and parents are the pride of their children. Proverbs 17:6

Marriage should be honored by all, and the marriage bed kept pure, for God will judge the adulterer and all the sexually immoral. Hebrews 13:4