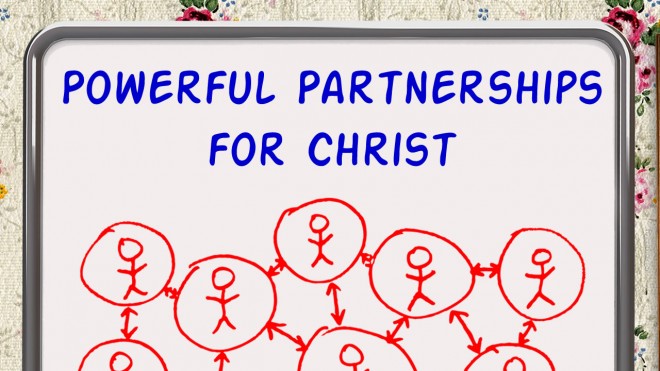 In powerful partnerships for Christ:

1. People cooperate, compliment, and capitilize on their strengths to spread the gospel.

After this, Paul left Athens and went to Corinth. There he met a Jew named Aquila, a native of Pontus, who had recently come from Italy with his wife Priscilla, because Claudius had ordered all the Jews to leave Rome. Paul went to see them, and because he was a tentmaker as they were, he stayed and worked with them. Every Sabbath he reasoned in the synagogue, trying to persuade Jews and Greeks. Acts 18:1-4

2. People are committed to one another and concentrate their efforts to grow the church.

Paul stayed on in Corinth for some time. Then he left the brothers and sailed for Syria, accompanied by Priscilla and Aquila. Before he sailed, he had his hair cut off at Cenchrea because of a vow he had taken. Acts 18:18

Meanwhile a Jew named Apollos, a native of Alexandria, came to Ephesus. He was a learned man, with a thorough knowledge of the Scriptures. He had been instructed in the way of the Lord, and he spoke with great fervor and taught about Jesus accurately, though he knew only the baptism of John. He began to speak boldly in the synagogue. When Priscilla and Aquila heard him, they invited him to their home and explained to him the way of God more adequately. Acts 18:24-26

Greet Priscilla and Aquila, my fellow workers in Christ Jesus. They risked their lives for me. Not only I but all the churches of the Gentiles are grateful to them. Greet also the church that meets at their house. Greet my dear friend Epenetus, who was the first convert to Christ in the province of Asia.
Romans 16:3-5

3. People consistently use their resources to serve God to further His kingdom.

The churches in the province of Asia send you greetings. Aquila and Priscilla greet you warmly in the Lord, and so does the church that meets at their house. 1 Corinthians 16:19

Greet Priscilla and Aquila and the household of Onesiphorus. 2 Timothy 4:19