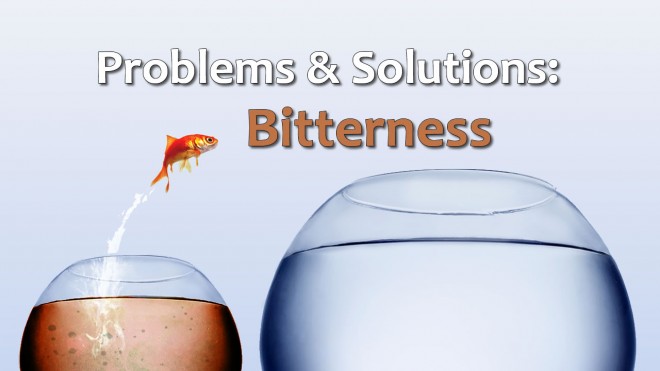 Get rid of all bitterness, rage and anger, brawling and slander, along with every form of malice. Be kind and compassionate to one another, forgiving each other, just as in Christ God forgave you. Ephesians 4:31-32

Each heart knows its own bitterness, and no one else can share its joy. Proverbs 14:10

Then the LORD said to Cain, “Why are you angry? Why is your face downcast? If you do what is right, will you not be accepted? But if you do not do what is right, sin is crouching at your door; it desires to have you, but you must master it.” Now Cain said to his brother Abel, “Let’s go out to the field.” And while they were in the field, Cain attacked his brother Abel and killed him. Genesis 4:6-8

So Satan went out from the presence of the LORD and afflicted Job with painful sores from the soles of his feet to the top of his head. Then Job took a piece of broken pottery and scraped himself with it as he sat among the ashes. His wife said to him, “Are you still holding on to your integrity? Curse God and die!” He replied, “You are talking like a foolish woman. Shall we accept good from God, and not trouble?” In all this, Job did not sin in what he said. Job 2:7-10

For I see that you are full of bitterness and captive to sin. Acts 8:23

“Don’t call me Naomi,” she told them. “Call me Mara, because the Almighty has made my life very bitter.” Ruth 1:20

The women said to Naomi: “Praise be to the LORD, who this day has not left you without a kinsman-redeemer. May he become famous throughout Israel! He will renew your life and sustain you in your old age. For your daughter-in-law, who loves you and who is better to you than seven sons, has given him birth.” Then Naomi took the child, laid him in her lap and cared for him. The women living there said, “Naomi has a son.” And they named him Obed. He was the father of Jesse, the father of David. Ruth 4:14-17

When David and his men came to Ziklag, they found it destroyed by fire and their wives and sons and daughters taken captive. So David and his men wept aloud until they had no strength left to weep. David’s two wives had been captured–Ahinoam of Jezreel and Abigail, the widow of Nabal of Carmel. David was greatly distressed because the men were talking of stoning him; each one was bitter in spirit because of his sons and daughters. But David found strength in the LORD his God. 1 Samuel 30:3-6

“I am the vine; you are the branches. If a man remains in me and I in him, he will bear much fruit; apart from me you can do nothing.” John 15:5