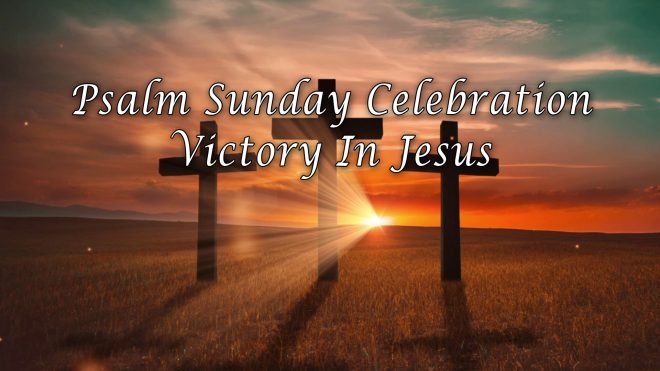 John 12:12-16
12 The next day the great crowd that had come for the festival heard that Jesus was on his way to Jerusalem. 13 They took palm branches and went out to meet him, shouting, “Hosanna!” “Blessed is he who comes in the name of the Lord!” “Blessed is the king of Israel!” 14 Jesus found a young donkey and sat on it, as it is written: 15 “Do not be afraid, Daughter Zion; see, your king is coming, seated on a donkey’s colt.” 16 At first his disciples did not understand all this. Only after Jesus was glorified did they realize that these things had been written about him and that these things had been done to him.

Hebrews 10:7-9
Then I said, ‘Here I am—it is written about me in the scroll— I have come to do your will, my God.’” 8 First he said, “Sacrifices and offerings, burnt offerings and sin offerings you did not desire, nor were you pleased with them”—though they were offered in accordance with the law. 9 Then he said, “Here I am, I have come to do your will.” He sets aside the first to establish the second.

2 Corinthians 5:21
21 God made him who had no sin to be sin for us, so that in him we might become the righteousness of God.

Hebrews 9:9-14
9 This is an illustration for the present time, indicating that the gifts and sacrifices being offered were not able to clear the conscience of the worshiper. 10 They are only a matter of food and drink and various ceremonial washings—external regulations applying until the time of the new order. 11 But when Christ came as high priest of the good things that are now already here, he went through the greater and more perfect tabernacle that is not made with human hands, that is to say, is not a part of this creation. 12 He did not enter by means of the blood of goats and calves; but he entered the Most Holy Place once for all by his own blood, thus obtaining eternal redemption. 13 The blood of goats and bulls and the ashes of a heifer sprinkled on those who are ceremonially unclean sanctify them so that they are outwardly clean. 14 How much more, then, will the blood of Christ, who through the eternal Spirit offered himself unblemished to God, cleanse our consciences from acts that lead to death, so that we may serve the living God!

1 Peter 1:17-19
17 Since you call on a Father who judges each person’s work impartially, live out your time as foreigners here in reverent fear. 18 For you know that it was not with perishable things such as silver or gold that you were redeemed from the empty way of life handed down to you from your ancestors, 19 but with the precious blood of Christ, a lamb without blemish or defect.

Hebrews 9:15
15 For this reason Christ is the mediator of a new covenant, that those who are called may receive the promised eternal inheritance—now that he has died as a ransom to set them free from the sins committed under the first covenant.

Galatians 5:1
It is for freedom that Christ has set us free. Stand firm, then, and do not let yourselves be burdened again by a yoke of slavery.

2 Timothy 1:7
7 For the Spirit God gave us does not make us timid, but gives us power, love and self-discipline.

Numbers 10:9
9 When you go into battle in your own land against an enemy who is oppressing you, sound a blast on the trumpets. Then you will be remembered by the LORD your God and rescued from your enemies.