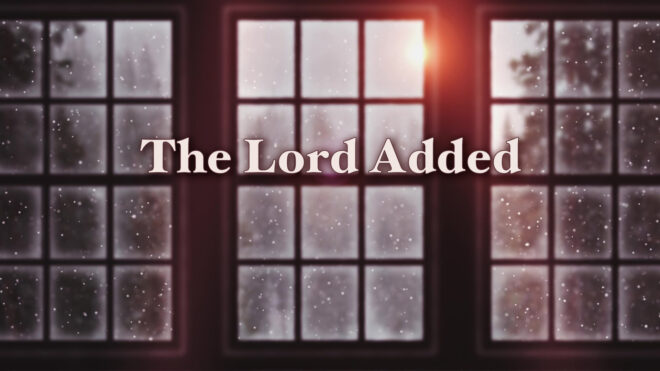 I. The Gospel that glues us

Acts 2:14-16
14 But Peter, standing up with the eleven, raised his voice and said to them, “Men of Judea and all who dwell in Jerusalem, let this be known to you, and heed my words. 15 For these are not drunk, as you suppose, since it is only the third hour of the day. 16 But this is what was spoken by the prophet Joel:

Acts 2:17-21
17 ‘And it shall come to pass in the last days, says God, that I will pour out of My Spirit on all flesh; your sons and your daughters shall prophesy, your young men shall see visions, your old men shall dream dreams. 18 And on My menservants and on My maidservants I will pour out My Spirit in those days; And they shall prophesy. 19 I will show wonders in heaven above and signs in the earth beneath: Blood and fire and vapor of smoke. 20 The sun shall be turned into darkness, and the moon into blood, before the coming of the great and awesome day of the Lord. 21 And it shall come to pass that whoever calls on the name of the Lord shall be saved.’

II Thessalonians 2:5-12
5 Do you not remember that when I was still with you I told you these things? 6 And now you know what is restraining, that he may be revealed in his own time. 7 For the mystery of lawlessness is already at work; only He who now restrains will do so until He is taken out of the way. 8 And then the lawless one will be revealed, whom the Lord will consume with the breath of His mouth and destroy with the brightness of His coming. 9 The coming of the lawless one is according to the working of Satan, with all power, signs, and lying wonders, 10 and with all unrighteous deception among those who perish, because they did not receive the love of the truth, that they might be saved. 11 And for this reason God will send them strong delusion, that they should believe the lie, 12 that they all may be condemned who did not believe the truth but had pleasure in unrighteousness.

II. The Gospel that glows us

Acts 2:22-39
22 “Men of Israel, hear these words: Jesus of Nazareth, a Man attested by God to you by miracles, wonders, and signs which God did through Him in your midst, as you yourselves also know— 23 Him, being delivered by the determined purpose and foreknowledge of God, you have taken by lawless hands, have crucified, and put to death; 24 whom God raised up, having loosed the pains of death, because it was not possible that He should be held by it. 25 For David says concerning Him: ‘I foresaw the Lord always before my face, for He is at my right hand, that I may not be shaken. 26 Therefore my heart rejoiced, and my tongue was glad; moreover my flesh also will rest in hope. 27 For You will not leave my soul in Hades, nor will You allow Your Holy One to see corruption. 28 You have made known to me the ways of life; You will make me full of joy in Your presence.’ 29 “Men and brethren, let me speak freely to you of the patriarch David, that he is both dead and buried, and his tomb is with us to this day. 30 Therefore, being a prophet, and knowing that God had sworn with an oath to him that of the fruit of his body, according to the flesh, He would raise up the Christ to sit on his throne, 31 he, foreseeing this, spoke concerning the resurrection of the Christ, that His soul was not left in Hades, nor did His flesh see corruption. 32 This Jesus God has raised up, of which we are all witnesses. 33 Therefore being exalted to the right hand of God, and having received from the Father the promise of the Holy Spirit, He poured out this which you now see and hear. 34 “For David did not ascend into the heavens, but he says himself: ‘The Lord said to my Lord, “Sit at My right hand, 35 Till I make Your enemies Your footstool.” ’ 36 “Therefore let all the house of Israel know assuredly that God has made this Jesus, whom you crucified, both Lord and Christ.” 37 Now when they heard this, they were cut to the heart, and said to Peter and the rest of the apostles, “Men and brethren, what shall we do?” 38 Then Peter said to them, “Repent, and let every one of you be baptized in the name of Jesus Christ for the remission of sins; and you shall receive the gift of the Holy Spirit. 39 For the promise is to you and to your children, and to all who are afar off, as many as the Lord our God will call.”

III. The Gospel that grows us

Acts 2:40-47
40 And with many other words he testified and exhorted them, saying, “Be saved from this perverse generation.” 41 Then those who gladly received his word were baptized; and that day about three thousand souls were added to them. 42 And they continued steadfastly in the apostles’ doctrine and fellowship, in the breaking of bread, and in prayers. 43 Then fear came upon every soul, and many wonders and signs were done through the apostles. 44 Now all who believed were together, and had all things in common, 45 and sold their possessions and goods, and divided them among all, as anyone had need. 46 So continuing daily with one accord in the temple, and breaking bread from house to house, they ate their food with gladness and simplicity of heart, 47 praising God and having favor with all the people. And the Lord added to the church daily those who were being saved.