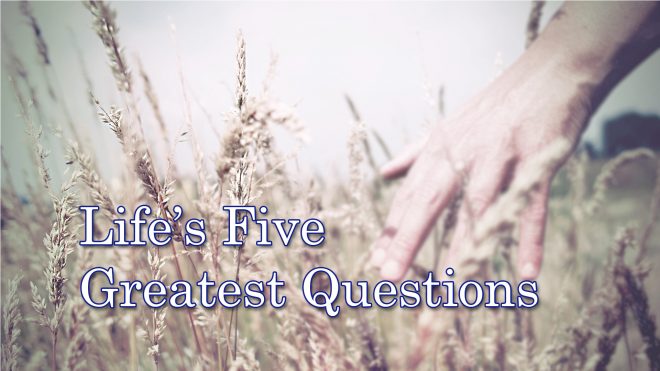 Psalm 8:3-5
When I look at the night sky and see the work of your fingers—the moon and the stars you set in place—what are mere mortals that you should think about them, human beings that you should care for them? Yet you made them only a little lower than God and crowned them with glory and honor.

Psalm 150:6
Let everything that has breath praise the Lord. Praise the Lord.
Ecclesiastes 12:13
Now all has been heard; here is the conclusion of the matter: Fear God and keep his commandments, for this is the duty of all mankind.

Micah 6:8
He has shown you, O mortal, what is good. And what does the Lord require of you? To act justly and to love mercy and to walk humbly with your God.

1 John 2:17
The world and its desires pass away, but whoever does the will of God lives forever.

Luke 18:18
A certain ruler asked him, “Good teacher, what must I do to inherit eternal life?”

Matthew 25:32-34
All the nations will be gathered before him, and he will separate the people one from another as a shepherd separates the sheep from the goats. He will put the sheep on his right and the goats on his left. “Then the King will say to those on his right, ‘Come, you who are blessed by my Father; take your inheritance, the kingdom prepared for you since the creation of the world.

Matthew 25:41-46
“Then he will say to those on his left, ‘Depart from me, you who are cursed, into the eternal fire prepared for the devil and his angels. For I was hungry and you gave me nothing to eat, I was thirsty and you gave me nothing to drink, I was a stranger and you did not invite me in, I needed clothes and you did not clothe me, I was sick and in prison and you did not look after me.’
“They also will answer, ‘Lord, when did we see you hungry or thirsty or a stranger or needing clothes or sick or in prison, and did not help you?’
“He will reply, ‘Truly I tell you, whatever you did not do for one of the least of these, you did not do for me.’
“Then they will go away to eternal punishment, but the righteous to eternal life.”

2 Corinthians 5:1
For we know that if the earthly tent we live in is destroyed, we have a building from God, an eternal house in heaven, not built by human hands.

1 Corinthians 2:9
However, as it is written: “What no eye has seen, what no ear has heard, and what no human mind has conceived”—the things God has prepared for those who love him
Revelation 21:1
Then I saw “a new heaven and a new earth,” for the first heaven and the first earth had passed away, and there was no longer any sea.

John 3:16-19
For God so loved the world that he gave his one and only Son, that whoever believes in him shall not perish but have eternal life. For God did not send his Son into the world to condemn the world, but to save the world through him. Whoever believes in him is not condemned, but whoever does not believe stands condemned already because they have not believed in the name of God’s one and only Son. This is the verdict: Light has come into the world, but people loved darkness instead of light because their deeds were evil.

Ephesians 2:8-9
For it is by grace you have been saved, through faith—and this is not from yourselves, it is the gift of God—not by works, so that no one can boast.

John 1:10-13
He was in the world, and though the world was made through him, the world did not recognize him. He came to that which was his own, but his own did not receive him. Yet to all who did receive him, to those who believed in his name, he gave the right to become children of God— children born not of natural descent, nor of human decision or a husband’s will, but born of God.

John 14:6
Jesus answered, “I am the way and the truth and the life. No one comes to the Father except through me.

Matthew 25:19
“After a long time the master of those servants returned and settled accounts with them.”

Luke 19:15
“He was made king, however, and returned home. Then he sent for the servants to whom he had given the money, in order to find out what they had gained with it.”

Hebrews 4:13
Nothing in all creation is hidden from God’s sight. Everything is uncovered and laid bare before the eyes of him to whom we must give account.

2 Corinthians 5:10
For we must all appear before the judgment seat of Christ, so that each of us may receive what is due us for the things done while in the body, whether good or bad.