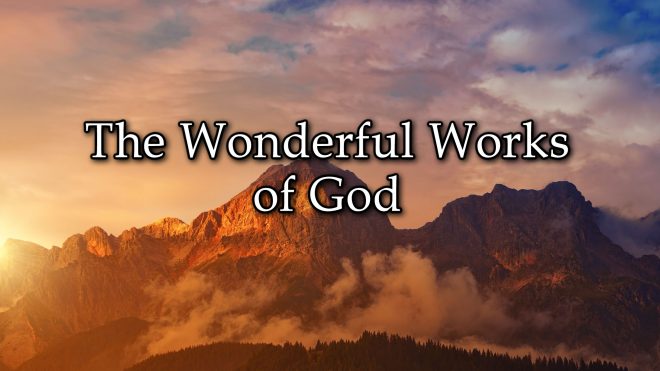 In the beginning God created the heavens and the earth.

Thus the heavens and the earth were completed in all their vast array.

The heavens declare the glory of God; the skies proclaim the work of his hands.

For since the creation of the world God’s invisible qualities—his eternal power and divine nature—have been clearly seen, being understood from what has been made, so that people are without excuse.

When I consider your heavens, the work of your fingers, the moon and the stars, which you have set in place, what is mankind that you are mindful of them, human beings that you care for them? You have made them a little lower than the angels and crowned them with glory and honor.

The Word became flesh and made his dwelling among us. We have seen his glory, the glory of the one and only Son, who came from the Father, full of grace and truth.

But we do see Jesus, who was made lower than the angels for a little while, now crowned with glory and honor because he suffered death, so that by the grace of God he might taste death for everyone.

The Son is the image of the invisible God, the firstborn over all creation.  For in him all things were created: things in heaven and on earth, visible and invisible, whether thrones or powers or rulers or authorities; all things have been created through him and for him. He is before all things, and in him all things hold together.  And he is the head of the body, the church; he is the beginning and the firstborn from among the dead, so that in everything he might have the supremacy.

The twenty-four elders and the four living creatures fell down and worshiped God, who was seated on the throne. And they cried: “Amen, Hallelujah!”

Then I heard every creature in heaven and on earth and under the earth and on the sea, and all that is in them, saying: “To him who sits on the throne and to the Lamb be praise and honor and glory and power, for ever and ever!”